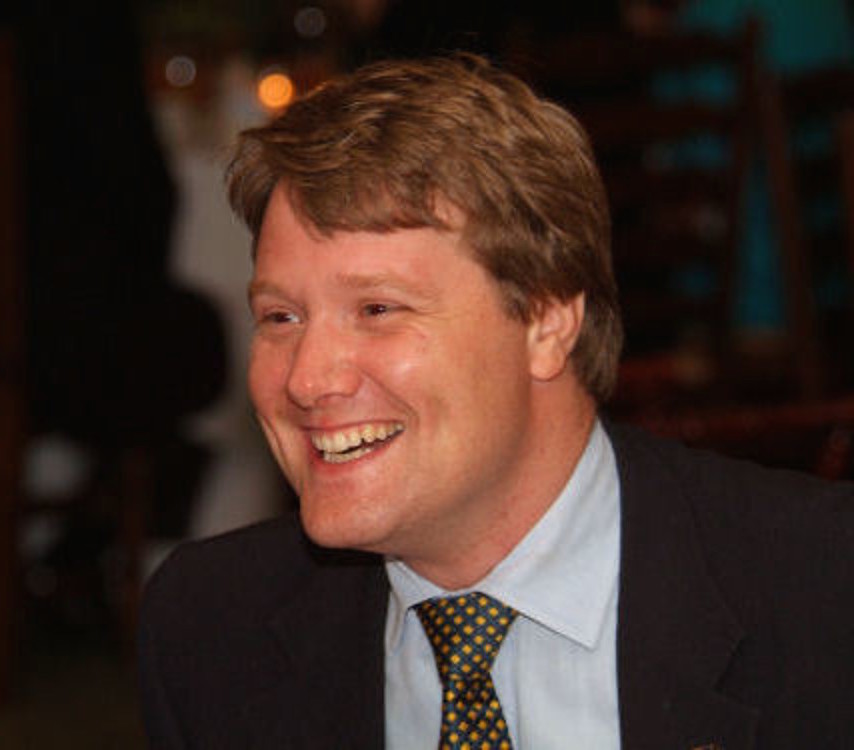 On 29 December 2018 after a valiant fight, my brother Jonathan lost his battle with interstitial lung disease. Throughout the eleven months following his diagnosis he showed great courage, most particularly in his final days when he received a barrage of bad news.

From the very beginning, Jonathan lived a spirited life. As a child he did everything at a hundred miles an hour. He was always on the go and passionate about his relationships and everything he did. It was a precursor of his life.

His childhood was a challenge for him. From an early age, his personality filled a room. His loving character shone through to everyone but some people found him difficult to cope with vis-à-vis their own children. Consequently, Jonathan was much misunderstood. He struggled at various schools where formal English boarding schools saw him only as a naughty schoolboy. Eventually the headmaster of a small rural school in Oxfordshire took Jonathan under his wing, nurtured him, giving him self-confidence and—crucially—realised that Jonathan was dyslexic. This diagnosis was at a time when dyslexia was not really on the radar as a recognised condition and dyslexic children were mistaken for being stupid. What Jonathan needed was his own way of learning, not being put at the back of the class or in a corner as a misbehaving no-hoper.

His formal education over, Jonathan launched himself into the world of work. He soon discovered that the formalised structure of employment did not suit him. I think this was a seminal moment. I remember him questioning what life held in store for him. He tried his hand at various businesses with his trademark work ethic but was never able to focus enough on the detail to make them sustainable in the long term. He always dreamed big and was impatient to reach his goal.

It was during one of his low points that he discovered his ability to speak and to inspire audiences. As someone wrote recently, “Jonathan had a smile that lit up a stadium.” He was thoroughly engaging, naturally charming and personally interested in people with whom he talked. He appeared to be an effortless public speaker although he had put in a lot of work to make it seem that way. At this moment, he began to read about and study the story of his great grandfather. Sir Winston Churchill’s life—and in particular, his early struggles—engaged his interest and inspired Jonathan. He felt a connection, and it made him realise that he was not alone in the experience he had had thus far in life. This became the catalyst for what turned out to be the last chapter of his life.

He began by speaking in schools to groups of students but very quickly, he found by word of mouth that invitations came from adult groups and other organisations. He spoke about various aspects of the life of Churchill, but, as time went by, he focused his efforts. Every day, Jonathan had a million ideas that passed through his head. Most continued on their journey but a few were plucked out, started, and in many cases, shelved for the future when he hoped to have more time. As a result, Jonathan leaves unfinished projects such as his Lead Like Churchill leadership course, the Little Winston series of children’s books to bring Churchill to youngsters and his Churchill’s Britain tours of following in his great grandfather’s footsteps.

For Jonathan, it was only worth doing something if it was big, transformative and would leave an indelible mark on its participants. He was one of life’s natural disruptors, always seeking a better way of doing something, never afraid to give his opinion and asking lots of probing questions. For those who did not want to be held accountable, he was seen as a nuisance despite always being respectful towards those with whom he interacted. Like everyone, he was not always right and one of his great gifts was his capacity to apologise—and to forgive those who had wronged him.

In the course of all this activity, he met Wallace Henley who was to be his partner in the greatest triumph of Jonathan’s life. Despite all the words written about Churchill, in discussion with Wallace and encouraged by Martin Gilbert, Jonathan felt he had found something that had not been studied: Churchill’s religious beliefs and practices. Over the course of a few years, these conversations were to transform into the publication in America and Britain of God and Churchill. For a dyslexic who had been considered worthless by most of his teachers, this was a monumental personal triumph.

Of course Jonathan being Jonathan, he dreamed of the book reaching the top of the bestseller lists. In consequence, he felt down when that did not happen. He read with bated breath the many reviews of his book—many good, some lukewarm and others negative. But to my mind, the reception did not really matter: Jonathan had achieved what many people dream of—and had been paid a substantial advance by a publishing house. His subject was always likely to arouse passions—religion being one of the conversations we are socially advised to avoid at the dinner table—but I do not believe that Jonathan would have wanted it any other way. He liked to make a splash, to engage people’s minds, to force intellectual confrontation on difficult subjects. For him, this was natural but others found it difficult.

In the end, God and Churchill became a passport for meeting people. Armed with his book, marketed as an author (a moment of pride when the Registrar of Deaths asked for Jonathan’s occupation) and receiving invitation after invitation to speak, Jonathan was in his element. He captivated his audiences, regaling them with stories with passion, humour and gravitas. He connected and made a difference in people’s lives, the extent of which we, his family, have seen in the many messages from those who encountered him, sometimes just on a solitary occasion. I think Jonathan would be amazed at how many people he inspired to greatness, to chase their dreams, not to give up and to persevere until in the distance they saw the broad sunlit uplands. The tragedy of his early death is that after close to forty years, Jonathan had found his feet. He was just getting started and we shall never know where this story could have ended but Jonathan leaves behind a monumental legacy of touching and inspiring the lives of strangers.

For most of the last decade of his life, Jonathan lived in Houston, Texas. He married Sara with whom he had two children, Jesse and Arizona Jane. They were his pride and joy, and his role as a father was something he adored. He is buried in England at St Mary’s Church, Shackleford with our father Julian and brother Roderick.

The serious nature of Jonathan’s illness caused him much reflection. He passionately believed that he would beat it, confidently telling his doctors on what turned out to be his last day that in the years to come they would be writing medical papers about him. He showed such tremendous courage in those final days. But as he dreamed of his plans for the future, at times he reflected on his life lived. It is hard to get to the top if, as Jonathan did with his big dreams, you live your life trying to go up a very long down escalator, and he felt he did not make it, that his life had not been a success. Perhaps that is true by the world’s traditional yardstick, for Jonathan ticked the boxes of few of life’s conventional “achievements” like attending university. He graduated from the school of hard knocks, ploughed his own furrow, made his own mark and left a legacy of inspiration and achievement. But perhaps Jonathan would like his life to be measured by his great grandfather’s definition that “success is defined as going from failure to failure without a loss of enthusiasm.” Using that gauge, Jonathan’s life was undoubtedly a monumental success with the needle blasting off the Richter scale.

JONATHAN SANDYS was born 16 March 1975 and died 29 December 2018. On 22 February a Celebration of his life was held in Houston, Texas. At 2 pm on 6 April, a Celebration will be held in London at St James the Less Church, Vauxhall Bridge Road, London SW1V 2PS.