‘Without an office, without a seat’ 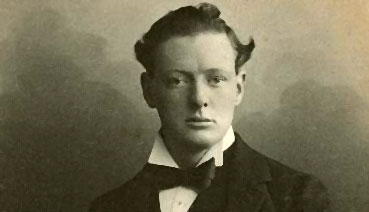 In October 1922, the Conservatives voted to bring down the coalition. Churchill was not in a fit state to fight his seat. He’d just been operated on for appendicitis and was too ill to take part in the earlier stages of the election. Clearly unwell and unable to fight with his usual vim and vigour, he lost.

Out of Parliament for the first time in twenty two years (apart from a few weeks in 1908), he retired to the South of France, took up writing again – he embarked on a mammoth history of the First World War, The World Crisis – but he couldn’t stay away from politics for long.

He lost his seat in the General Election in 1922 and, standing for the last time as a Liberal in 1923’s General election in Leicester West, was defeated by the Labour candidate. But in March 1924, Churchill entered the fray as an ‘independent anti-socialist’ and only very narrowly lost the Westminster Abbey by-election, missing out to the Conservatives by a mere 45 votes.

His near-miss encouraged the local Conservative association to adopt him as their candidate for Epping. Always one to take advantage of opportunities when presented to him, and after only a little hesitation, Churchill accepted.

In the general election of October 1924, the Conservatives won a massive majority and Churchill, an enormous 10,000-vote majority at Epping (later Woodford), a seat he was to hold this seat until his retirement in 1964.

After more than twenty-five years with the Liberals, he was a Conservative again, ‘crossing the floor’ for the second time. He would remain a member of the party of his father, Lord Randolph, for the remainder of his life.