The “People’s Budget” dominated the attention of the nation and Churchill. A principal protagonist in the looming battle between the Commons and the Lords, he told Clementine that he could not make up his mind “whether to be provocative or conciliatory . . . But on the whole I think it will be the former!” He was. He accused the Lords of thinking “they were the only persons fit to serve the Crown. They regard the government as their perquisite and political authority as merely an adjunct to their wealth and titles.” It was not the kind of remark likely to earn the affection of his own class.

‘Take that in the name of the insulted women of England.’

In September Churchill went to Germany to observe maneuvers of the German army and visit German Labor Exchanges. Of the former, he was impressed by the size and armaments, and by the fact that the army could march 35 miles in a day. Of the Labor Exchanges, he commented that “the honour of introducing them into England would be in itself a rich reward.”

Back in England, WSC and Clementine frequently attended shooting and dinner parties where politics and personalities were usually discussed. At one, after quantities of champagne and Madeira were consumed, he stated that “the difference between Balfour and Asquith was that Balfour was wicked and moral, while Asquith was good and immoral.”

To settle the Lords-Common dispute, Asquith prorogued Parliament and the “Peers vs. People” election campaign began. WSC was attacked while campaigning by a suffragette who lashed at him with a whip: “Take that in the name of the insulted women of England.” 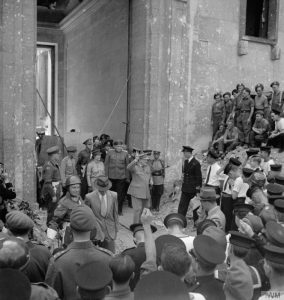