The Official Biography of Winston Churchill About The Official Biography

Churchill had long wished to write his father’s biography, and by the end of the 1950’s was making strong efforts to win his father’s confidence. In May 1960 Winston Churchill wrote to his son:

‘My dear Randolph, I have reflected carefully on what you said. I think that your biography of Derby [Lord Derby, by Randolph Churchill, Cassell: London 1959] is a remarkable work, and I should be happy that you should write my official biography when the time comes. But I must ask you to defer this until after my death. I would not like to release my papers piecemeal, and I think that you should wait for the time being and then get all your material from my own Archives and from the Trust. In any case, I do not want anything to be published until at least five years after my death. — Your loving father, Winston S. Churchill’

The first volume of Winston S. Churchill was published in 1966, the year after Sir Winston died. After Randolph’s death in 1968 Martin Gilbert, who had joined Randolph as a research assistant in 1962, was appointed by the Churchill family to be the official biographer.

Sir Martin died in 2015 and since that time his former assistant, Dr Larry Arnn now of Hillsdale College is working to complete the biography companion volumes, known as The Churchill Documents. Sir Martin included the following acknowledgement: ‘The publication of [The War Papers] was made possible by the exceptional generosity of Wendy Reves, and by the determination of the International Churchill Society… to bring the Churchill document series, known as the Companion Volumes, back into production.’

The following volumes of the Official Biography have been published to date:

“‘Why study Churchill?,’ I am often asked.  ‘Surely he has nothing to say to us today?’  Yet in my own work, as I open file after file of Churchill’s archive, from his entry into government in 1905 to his retirement in 1955 (a fifty-year span) I am continually surprised by the truth of his assertions, the modernity of his thought, the originality of his mind, the constructiveness of his proposals, his humanity, and, most remarkable of all, his foresight.”

You will help to support the International Churchill Society by purchasing your hardcover or digital editions at Amazon.com by following this link.

Incidentally, the name ‘Official Biography’ is somewhat misleading, as Sir Martin Gilbert noted in a 1991 interview with Brian Lamb on C-Span’s ‘Booknotes’: ‘I’m called the official biographer, though to the enormous credit of the Churchill family they’ve never asked to see a single word of what I was writing until the books were printed and bound and ready for sale to the public. They never asked me to delete a word or to skirt around a particular issue. So ‘official’ is a misnomer if it’s thought to mean a censored or restricted biographer.’ 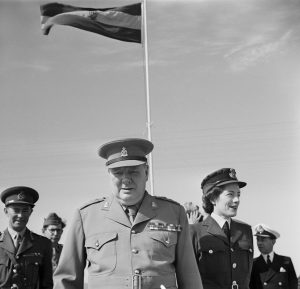 An Interview with Mary Soames