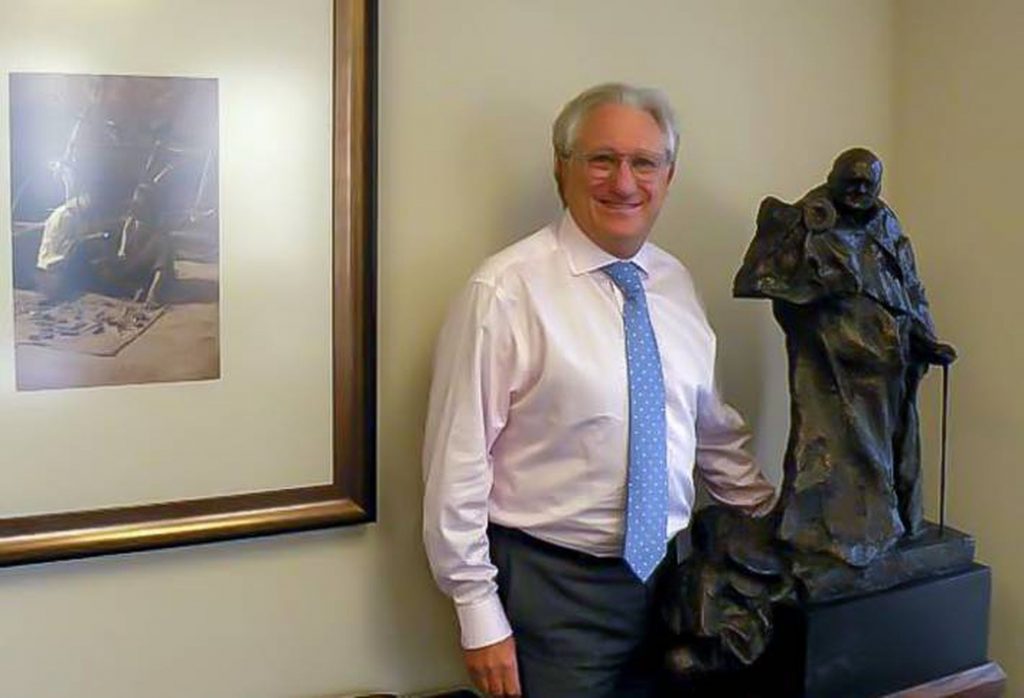 The Folger Library in Washington, D.C. recently opened a new exhibit, ‘Churchill’s Shakespeare.’ The following are the remarks from the opening by International Churchill Society Chairman Laurence Geller CBE.

I would like to thank Folger’s Shakespeare’s Library for inviting Jennie Churchill and me to participate in this evening’s event.

On behalf of all of us at the ICS, let me thank Folger’s Michael Witmore and Georgianna Ziegler for making this wonderful exhibition and event possible.

It is an honor to share this platform with Mathew Barzun whose passion for education added to his so well performed day job made him amongst the best US Ambassadors to the Court of James in modern times.

I would also like to thank the Churchill Archive’s Centre Director, the astonishingly versatile Allen Packwood not only for his involvement in this exhibition, for his participation, energy, humor and always unfettered passion and enthusiasm for all things Churchill.

He will always be high up in the pantheon of Churchill heroes.

I would also like to congratulate Allen on the upcoming release of his superb and vividly informative book, How Churchill Waged War.

This book brilliantly demonstrates the power of world-class collection and curation of archival resources when used to their full extent.

It is an amazing exploration of some of the key moments in Churchill’s War premiership. It ably strips way myriad layers of hindsight as it plunges the reader back into events as they happened.

This book truly makes compelling reading and is a wonderful addition to our understanding of the multidimensional life of Winston Churchill.

Talking of world-class, this superbly curated exhibition demonstrates how Winston Churchill was first exposed to Shakespeare as a schoolboy.

There is no doubt that memorizing lines for the Shakespeare competition at Harrow when he was 13 and competing with 17-year-olds, must have been painful at the time. However, there is equally no doubt, that his Shakespeare studies ultimately helped him develop his own all-important use of memory and language.

It was these skills that became crucial weapons in his historic struggle. Not only for Liberty and Freedom. But for mankind to have free and self-respecting lives in a just society. He clearly set an example for generations to follow and endeavor to emulate and earned a Nobel Prize for the written and spoken word for his efforts while living with his daughter Mary’s comment that Papa lived from pen to mouth.

During World War II, the cruel blitz of London, Churchill translated into action of Shakespeare’s Henry V words before the battle of Agincourt admonishing all around him: “All things be ready if our minds be so”

Who can argue that Shakespeare’s  Julius Caesar or Richard III can only have been a good preparation for anyone who wants to go into politics.

One might wonder how much better would politicians be were they to have studied Shakespeare with the intensity of Churchill and learned the obvious and subtle lessons from the 17th century as written by Britains finest bard?

It seems to me to be such a shame that the rest of Churchill’s formal schooling failed to make an immediate impact. What more could he have accomplished.

It was not that he lacked intelligence.  Far from it.

In his early school reports, his teachers speak of his having “good abilities” and commented  that “he could be first in his class if he tried.”

No, the problem was that he wasn’t trying. It was simply that he was not engaged.

At the age of 7, he was sent  St. James preparatory boarding school, run by a sadist who caned the young boys till they bled.

He refused to fall in with school ways and the cycle of beatings, defiance and beatings continued until finally, his family removed him, no longer able to tolerate his bloody wounds.

His attitude towards learning was summed up, when he later wrote, “Where my reason, imagination or interest were not engaged, I would not or I could not learn”.

As a result, Churchill ended up with school reports that read: “Conduct has been exceedingly bad. He cannot be trusted to behave himself anywhere” and “he is only consistent in his inconsistency.”

Although, as Allen mentioned, his headmaster concluded that he lacked ambition.

I cannot help but speculate on what would have happened if the young Winston Churchill had just given in and accepted he lacked ambition.

Where would Freedom and Liberty be today?

And how many of his contemporaries were prepared to give in? How many did give in?

How readily so very many appeared to be to sacrifice the Liberty of the Human Spirit and the so very precious Rights of Man for the sake of what would have likely swiftly evaporating expediencies.

Thankfully for us all, the steadfast Churchill, armed with the certainty of history and bolstered by the lessons of Shakespeare, Gibbon and McCauley, did not give in.

The simple lesson I take from this is that, if we want young people to learn, we need to capture their imaginations and give them the resources tailored to today’s societal trends.

Shakespeare’s words & stories did this for Churchill.

Importantly, I believe this exhibition has the ability to captivate and inspire the next generation of writers and leaders.

I am so very impressed and glad that there are essential activities within the display aimed at young people.

This is why I have helped support and create “Churchill Archive For Schools”, a free online resource based on the material within the Churchill Archives Centre and, importantly, is available free to all high schools throughout the world.

It takes the original non-digitalized documents, like those you will see in the display today, and groups them in modules and exercises, placing them in context and regularly updated for modern trends amended for geographic differences–say between US & UK with well over 1,000 schools already enrolled in this program, our work has started bit Churchill’s word, this is merely “The end of the beginning.”

I know the Ambassador will say more on a similar theme for he s truly passionate about education and continues as an agent of change as he strives to improve the educational world.

I am just thrilled that by bringing together these two unique collections, relating to two literary giants, two of Great Britain’s Finest Sons, something truly inspiring and truly educational has been created in the very heart of the nation’s capital.

In a 1948 speech to the House of Commons, Churchill paraphrased Santayana when he said ‘Those who fail to learn from history are condemned to repeat it.’

It is wonderful to see the International Churchill Society, the Folger Library and the Churchill Archives bringing history alive and ensuring that the lessons learned from the hard-earned past are translated into a force for good in today’s volatile and fast-changing world.

Churchillians everywhere are grateful and, on their behalf, I thank you.