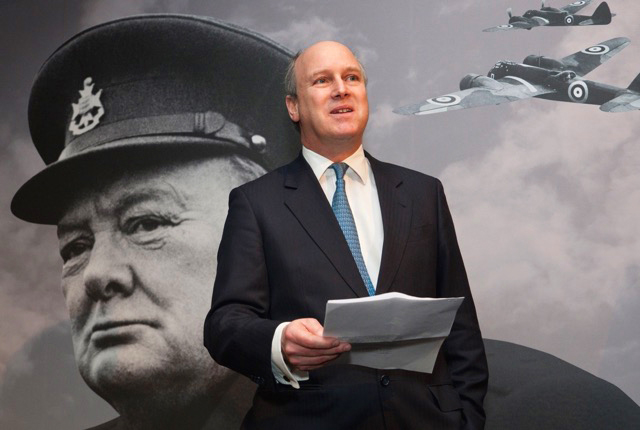 Highlights of the fiftieth anniversary commemoration in photos Randolph Churchill (Winston Churchill’s great grandson) photographed speaking at the press preview of “Churchill’s Scientists” the UK’s first exhibition on Churchill and science to mark 50th anniversary of his death.

30 January 2015 marked the fiftieth anniversary of the State Funeral of Sir Winston Churchill. In commemoration of this event, three separate ceremonies were held in London.

The Port of London launch MV Havengore repeated the same journey up the Thames that it took when bearing Churchill’s body after the funeral in St. Paul’s Cathedral. Members of the Churchill family were on board as Tower Bridge was raised to full elevation, an honour normally reserved for the sovereign. Onlookers atop Millennium Bridge watch the MV Havengore process down the River Thames. A wreath is cast into the Thames to commemorate the state funeral of Winston Churchill 50 years before.
A wreath-laying ceremony took place in the lobby of the House of Commons. Prime Minister David Cameron spoke while standing next to the statue of Churchill created by Oscar Nemon that has flanked the entrance to the Commons since 1971. Leaders of Parliament and Sir Nicholas Soames MP, Sir Winston’s grandson, all presented wreaths. The Houses of Parliament marked the 50th anniversary of Sir Winston Churchill’s state funeral with a wreath-laying ceremony at the statue of Churchill in Members’ Lobby. Prime Minister David Cameron speaks.
Another ceremony took place in Westminster Abbey. Three of Sir Winston’s great-great-grandchildren helped to lay wreaths at the memorial stone in the nave of the Abbey that bears the inscription, “Remember Winston Churchill.” Three of Sir Winston Churchill’s great-great-grandchildren (Iona Pite, John Winston Spencer Churchill, and Christabel Fraser) participate in wreath-laying at memorial in Westminster Abbey.
In addition to the formal ceremonies in London, many people from all over the world visited the churchyard of St. Martin’s, Bladon to place their own floral tributes where Churchill lies buried along with the members of his immediate family. Floral tribute at Sir Winston’s grave on the 50th anniversary of his State Funeral.
The Churchill Centre is producing a special issue of its journal Finest Hour to record all of the events that took place during the week of the fiftieth anniversary of Churchill’s death and funeral. Further details will appear in the February issue of The Chartwell Bulletin.