The Bravest Deed I Ever Saw Three different bindings for the book

Ronald I. Cohen MBE is author of A Bibliography of the Writings of Sir Winston Churchill, 3 vols. (2006).

Courage meant a great deal to Winston Churchill. In his 1931 profile of Spain’s King Alfonso XIII titled “Alfonso the Unlucky,” subsequently published as a chapter in Great Contemporaries, Churchill wrote,

Men and kings must be judged in the testing moments of their lives. Courage is rightly esteemed the first of human qualities because, as has been said, it is the quality which guarantees all others.

As part of the tributes to Churchill made in the House of Commons on 28 July 1964, Labour veteran “Manny” Shinwell—then eighty years old himself—spoke about his personal recollections of “the scintillating oratory of Lloyd George, which could electrify the House,…the shrewdness of Stanley Baldwin, the rare debating quality of Bonar Law and Lord Hugh Cecil, and the dignified utterances of Mr. Asquith, and…the un-flappability of [Harold] Macmillan….” “But,” Shinwell continued, “distinguished as those Parliamentarians were, none of them—I say this with the utmost respect—could transcend the brilliance, the courage, the forthrightness and the remarkable qualities of the right hon. Gentleman the Member for Woodford.”

While this column usually deals with books primarily written by Churchill, his contributions to volumes written or edited by others also offer words and thoughts of considerable interest including what he wrote on courage.

Churchill first told the story of Surgeon-Lieutenant J. H. Hugo’s remarkable action under fire in his earliest book The Story of the Malakand Field Force, published in 1898. But Churchill gave a separate recounting of the bravery he witnessed that has not been republished for more than a century. It originally appeared in the weekly periodical V.C. in July 1903 and was then collected in an anthology entitled The Bravest Deed I Ever Saw, published in November 1905 and edited by Alfred Miles.

In his account entitled simply “The Doctor and the Soldier,” Churchill tells the tale of what he witnessed on India’s Northwest Frontier during an attack on 27 July 1897. Lieutenant H. B. Ford, Acting-Adjutant of the 31st Punjab Infantry, had been dangerously wounded in the shoulder. The bullet had cut an artery, and Ford was bleeding to death when Surgeon-Lieutenant Hugo went to his aid in the most unimaginable circumstances. Churchill wrote:

Now it was quite dark, and the fire was too hot for any one to use lights. There wasn’t a scrap of cover anywhere. It was all in the open, exposed to a deadly fire. Nevertheless, Hugo not only went to the aid of Ford, but at the peril of his life he struck a match and examined the wound. The match went out amid a splutter of bullets, which kicked up the dust all around, but by its uncertain light he saw the nature of the injury. The officer had already fainted from loss of blood. The doctor seized the artery, and, as no other ligature was forthcoming, he remained under fire for three hours holding a man’s life between his finger and thumb. When at length it seemed that the enemy had broken into the camp, he picked up the still unconscious officer in his arms, and, without relaxing his hold, bore him to a place of safety. His arm was for many hours paralysed with cramp from the effects of the exertion of compressing the artery. I think there are few, whatever may be their views or interests, who will not applaud this splendid act of devotion.

The profession of medicine and surgery must always rank as the most noble that men can adopt. The spectacle of a doctor in action among soldiers, in equal danger and with equal courage, saving life where all others are taking it, allaying pain where all others are causing it, is one which must always seem glorious, whether to God or man. It is impossible to imagine any situation from which a human being might better leave this world and embark on the hazards of the Unknown.

The Bravest Deed I Ever Saw was published in a number of different bindings and at least four editions in the UK and Canada in 1905. It is a charming, but captivating obscurity, well worth a look given the importance of courage in Churchill’s own life-story. 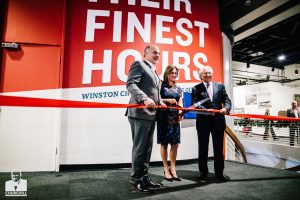