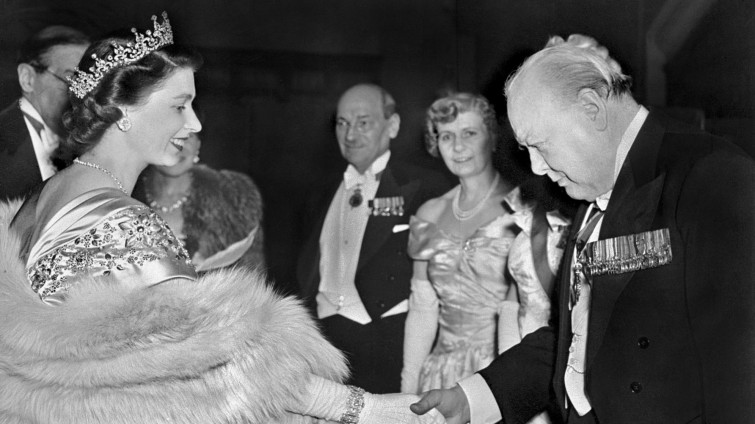 Churchill greets the Queen, while Clement Attlee and his wife Violet look on

Roddy Mackenzie is a retired Canadian lawyer, enthusiastic monarchist, and lifelong Churchill admirer. This article is based on his 2016 address to the Rt Hon Sir Winston Spencer Churchill Society of British Columbia.

The relationship between Sir Winston Churchill and Queen Elizabeth II is both fascinating and important for many reasons. Among them:

Within the Churchill papers, the earliest recorded reference to the future queen is found in a letter to his wife that Churchill wrote from Balmoral Castle on 25 September 1928, in which Churchill anticipates the destiny of the future sovereign: “There is no one here at all except the Family, the Household & Queen Elizabeth—aged 2. The last is a character. She has an air of authority & reflectiveness astonishing in an infant….”1

While The Queen and Churchill first met when she was a toddler, their knowledge of one another was superficial until Elizabeth became the sovereign. The Queen, as Nicholas Davies has written, “had, of course, grown up believing that Winston Churchill, Britain’s war-time Prime Minister, had saved the nation from Hitler and his mighty German military machine. She revered him as many other young people did at that time.”2

After Churchill received the sad news of the death of King George VI, John Colville tried to console his boss by saying he would find the new Queen charming, attractive, intelligent, and immensely conscientious. Churchill replied through his tears: “I hardly know her, and she is only a child.”3 But Colville knew better. He had served as Private Secretary to Princess Elizabeth from 1947 to 1949 in between his periods of service as a Principal Private Secretary to Prime Minister Churchill.

Churchill’s youngest daughter Mary told her own daughter Emma Soames: “The Queen very quickly captivated him, he fell under her spell. I think he felt early on her immense sense of duty, and he looked forward to his Tuesday afternoon meetings with the young monarch.”4 Mary also recalled Churchill’s refusal to consider Prince Philip’s suggestion that the House of Windsor be renamed the House of Edinburgh or Lord Mountbatten’s idea that it become the House of Mountbatten. No lasting damage resulted, and, on 24 April 1953, The Queen invested Churchill with the Order of the Garter.

Clementine told her husband from time to time: “You are Monarchical No. 1 and value tradition, form and ceremony.”5 But while Churchill admired the monarchy, he did not particularly admire the monarchs. He had his differences with King Edward VII, King George V, and even King George VI during the Second World War. Queen Elizabeth II dedicates a statue of Churchill in Paris with French President Jacques Chirac, 11 November 1998The reality, as royal biographer Philip Ziegler has observed, was that, “With the solitary exception of the abdication, it is hard to think of a single instance in which Churchill changed his views or his course of action on any important question in accordance with his perception of the wishes of the monarch of the time…. All his historical romantic instincts ensured that he would view it with profound respect or even reverence, but that was something distinct from the business of running the country.”6

When it came to public respect for the monarchy, however, Churchill excelled. In his broadcast of 7 February 1952 about the death of King George VI, he waxed eloquent about the reigns of earlier queens:

Now that we have the Second Queen Elizabeth…. We understand why her gifts, and those of her husband, the Duke of Edinburgh, have stirred the only part of our Commonwealth she has yet been able to visit. She has already been acclaimed as Queen of Canada,…and tomorrow the proclamation of her sovereignty will command the loyalty of her native land and of all other parts of the British Commonwealth and Empire. I, whose youth was passed in the august, unchallenged and tranquil glories of the Victorian Era, may well feel a thrill in invoking, once more, the prayer and the Anthem, God Save The Queen!7

Just days before the 1953 Coronation, Churchill addressed the Commonwealth Parliamentary Association in the Queen’s presence: “Here today we salute fifty or sixty Parliaments and one Crown. It is natural for Parliaments to talk and for the Crown to shine.” He then continued: “Well do we realize the burdens imposed by sacred duty upon the Sovereign and her family. All round we see the proofs of the unifying sentiment which makes the Crown the central link in all our modern changing life, and the one which above all others claims our allegiance to the death.”8

Churchill and The Queen thoroughly enjoyed one another’s company. Jock Colville wrote that Churchill “was madly in love with the Queen…and that she got more fun out of her audiences with Churchill than with any of his successors.”9 The Queen’s Private Secretary Sir “Tommy” Lascelles wrote: “I could not hear what they talked about, but it was, more often than not, punctuated by peals of laughter, and Winston generally came out wiping his eyes.”10

The Queen, by the time of her Coronation, “… had developed a close and unique bond with Britain’s most formidable statesman. His fondness for both of her parents, along with the shaping experience of the Second World War, gave them a reservoir of memories and a common perspective, despite their five-decade age difference. She appreciated his wisdom, experience, and eloquence, and looked to him for guidance on how she should conduct herself as monarch.”11

Churchill’s note following his resignation illuminates the importance of his role as The Queen’s constitutional tutor:

I have tried throughout to keep Your Majesty squarely confronted with the grave and complex problems of our time. Very soon after taking office as First Minister I realized the comprehension with which Your Majesty entered upon the august duties of a modern Sovereign and the store of knowledge, which had already been gathering by an upbringing both wise and lively. This enabled Your Majesty to understand as it seemed by instinct the relationships and the balances of the British constitution so deeply cherished by the mass of the Nation and by the strongest and most stable forces in it. I became conscious of the Royal resolve to serve as well as rule, and indeed to rule by serving.12

Mary Soames remarked, “My father knew very well what the position of constitutional monarch is vis à vis prime minister, cabinet and parliament. So it was a great advantage for her first prime minister to be somebody who really did know that.”13

Evidently Churchill devoted much time to tutoring The Queen on his extraordinary mastery of the complexities of British constitutional law and custom governing relations of the Crown, the Cabinet, Parliament, and the people. No one could make better use of this knowledge than the Prime Minister’s pupil. Nicholas Davies observes that “it was left to Churchill to explain to her some of the intricacies of British party politics. He would spend hours with her, drilling her for weeks, explaining what was happening, and what had to be done. Undoubtedly, Elizabeth had much to learn from the seventy-eight-year-old Churchill who wanted to be her teacher and professor, her guide and mentor, educating her in the ways of the world.”14

Churchill’s influence over the young queen, however, extended beyond explaining constitutional matters. At the conclusion of her six-month 1954 Australasia Commonwealth tour, The Queen sailed up the Thames to London with Churchill. “One saw this dirty commercial river as one came up,” said The Queen later, “and he was describing it as the silver thread which runs through the history of Britain. He saw things in a very romantic and glittering way; perhaps one was looking at it in a rather too mundane way.”15 Welcoming The Queen home, Churchill outdid himself, saying: “I assign no limits to the reinforcement which this royal journey may have brought to the health, the wisdom, the sanity and the hopefulness of mankind.”16

Overshadowing The Queen’s relationship with Churchill were his deteriorating health and his reluctance to retire. Three weeks after her Coronation, Churchill had a stroke, which almost killed him. This was kept secret until Churchill spoke of it to a stunned House of Commons a year later. Moreover, “as his mental and physical faculties decayed, Churchill was losing the battle he had fought for so long against the ‘Black Dog’ of depression.”17

Churchill’s poor health created the other major issue—his retirement. King George VI had evidently been working on Churchill’s retirement, but his death gave Churchill “the perfect reason” to stay on.18 Churchill said he would retire on specific dates, but then he found excuses to hang on. And so it went until he finally resigned on 5 April 1955. He was eighty years old.

The admiration of Winston Churchill and Queen Elizabeth II for one another grew as their relationship deepened. In his final toast to her as Prime Minister, Churchill said:

Never have the august duties which fall upon the British monarch been discharged with more devotion than in the brilliant opening to your Majesty’s reign. We thank God for the gift he has bestowed upon us and vow ourselves anew to the sacred cause, and wise and kindly way of life of which your Majesty is the young, gleaming champion.19

In response, The Queen sent a handwritten letter to Churchill assuring him that no subsequent Prime Minister would “be able to hold the place of my first prime minister to whom both my husband and I owe so much and for whose wise guidance during the early years of my reign I shall always be so profoundly grateful.”20