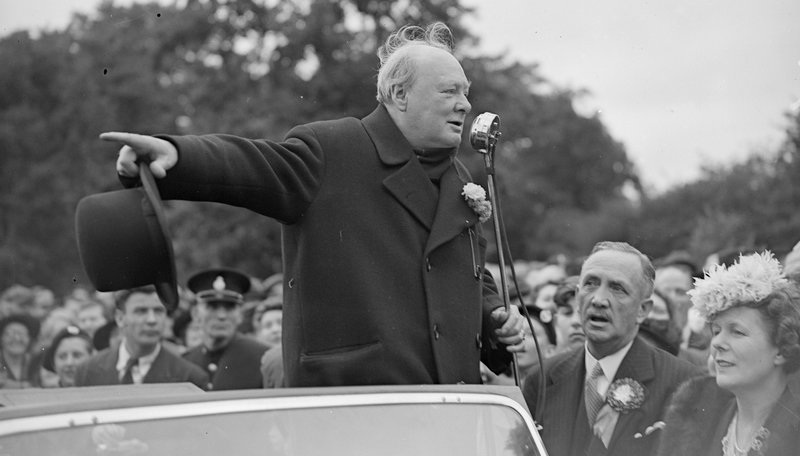 Winston Churchill speaking during the election campaign in 1945.

Finest Hour answers hundreds of emails to The International Churchill Society asking us to verify Churchill quotes, many of which turn out to be red herrings. Many remarks which Churchill used originated with others (e.g., “Democracy is the worst system, except for all the other systems”). He deployed his favourites frequently, but not always with attribution, or even quote marks, because he assumed his listeners would recognise them instantly. In his time, sadly, people were simply better read than they are today.

Here are some of the most popular, referenced in Churchill by Himself, the book of Churchill quotes by Richard Langworth (reviewed on page 49).

“I am a man of simple tastes—I am quite easily satisfied with the best of everything.”

This remark is frequently said to have been made to the manager of the Plaza Hotel in New York City on Churchill’s 1929 or 1931 visit. Sir John Colville, WSC’s longtime private secretary, credits it to Churchill’s close friend F.E. Smith, Lord Birkenhead: “Winston is easily satisfied with the best.” But since the publication of Churchill by Himself (page 49), Robert Pilpel has informed us that the originator was George Bernard Shaw. In Shaw’s play Major Barbara (1905), Lady Britomart says (act 1, scene 1): “I know your quiet, simple, refined, poetic people like Adolphus—quite content with the best of everything!”

Of course, Churchill may have learned the phrase from Shaw or Smith, and adapted it later.

“I like pigs. Dogs look up to us. Cats look down on us. Pigs treat us as equals.”

Sir Anthony Montague Browne, WSC’s private secretary, 1952-65, quotes the more likely version: “Dogs look up to you, cats look down on you. Give me a pig! He looks you in the eye and treats you as an equal.” Several other variations exist, Sir Anthony’s is the most authentic. A version posted at Chartwell, which doesn’t sound like WSC’s style, reads: “…Cats look down on human beings, dogs look up to them, but pigs just treat us as human beings.”

“Success is the ability to go from one failure to another with no loss of enthusiasm.”

No attribution. A number of sources credit this to Abraham Lincoln, but without attribution. A correct substitute: “Success always demands a greater effort.” (WSC to Australian Prime Minister Robert Menzies, 13 December 1940, published in Their Finest Hour, 1949.)

“Courage is the first of human qualities because it is the quality which guarantees all others.”

Correctly: “Courage is the first of human qualities because, as has been said, it is the quality…” etc. (“Alfonso the Unlucky,” Strand Magazine, July 1931; reprinted in Great Contemporaries, 1937. “As has been said” likely refers to Samuel Johnson’s “Sir, you know courage is reckoned the greatest of all virtues; because, unless a man has that virtue, he has no security for preserving any other.”

Reiterated in many sources including a 2005 TV ad by Lockheed Martin. A marketing pitch that was dressed up as a Churchill quote.

“Play the game for more than you can afford to lose….only then will you learn the game.”

No attribution. A correct substitute: “It is a fine game to play the game of politics and it is well worth a good hand before really plunging.” (WSC to his mother, Aldershot, 16 August 1895.)

“You have enemies? Good. That means you’ve stood up for something, sometime in your life.”

No attribution. Substitute: “The spectacle of a number of middle-aged gentlemen who are my political opponents being in a state of uproar and fury is really quite exhilarating to me.” (House of Commons, 21 May 1952.)

“There is no such thing as a good tax.”

No attribution. Substitute: “Taxes are an evil—a necessary evil, but still an evil, and the fewer we have of them the better.” (House of Commons, 12 February 1906.)

“Continuous effort is the key to unlocking our potential.”

No attribution found. Here is a substitute, not an original Churchill quote (it’s from Longfellow, “The Ladder of St. Augustine,” stanza 10); but frequently repeated both by WSC and his son Randolph:

The heights by great men reached and kept
Were not achieved by sudden flight,
But they, while their companions slept,
Were toiling upward in the night.

“I drink a great deal. I sleep a little, and I smoke cigar after cigar. That is why I am in two-hundred-percent form.”

“An empty car drew up and Clement Attlee got out”….“He is a sheep in sheep’s clothing!”

Allegedly said but unverified. According to Ralph Keyes, editor of The Quote Verifier (2006): “British quote maven Nigel Rees thought the comment might have originated with newspaper columnist J.B. Morton [1893-1979] in the 1930s.”

“Smoking cigars is like falling in love; first you are attracted to its shape; you stay for its flavour; and you must always remember never, never let the flame go out.”

Published without attribution in The American Spectator, July–August 2005. Editor R. Emmett Tyrrell questioned the attributor, who said it was reported by Randolph Churchill in a 1953 conversation, but “of course Randolph was drunk at the time.” A little dubious.

“Well, dinner would have been splendid if the wine had been as cold as the soup, the beef as rare as the service, the brandy as old as the fish, and the maid as willing as the Duchess.”

No attribution. Along the lines of the quote above, Churchill did not make smutty gags.

“The heaviest cross I have to bear is the Cross of Lorraine.”

This reference to de Gaulle was actually by General Spears, WSC’s military representative to France, 1939–40.

Birth: “Although present on that occasion, I have no clear recollection of the events leading up to it.”

Remarkably, this famous and oft-quoted expression doesn’t track. It is not among Churchill’s published words and appears only in The Last Lion by William Manchester, whose notes do not lead the reader to its origin.

“The best argument against Democracy is a five-minute conversation with the average voter.”

No attribution. Though he sometimes despaired of democracy’s slowness to act for its preservation, Churchill had a more positive attitude towards the average voter.

“I am going to make a long speech today; I haven’t had time to prepare a short one.”

If he ever said it, he was quoting Blaise Pascal in 1656.

“A fully equipped duke costs as much to keep as two dreadnoughts; and dukes are just as great a terror and they last longer.”

Lovely, but it was Lloyd George, not Churchill.

Credit Harold Macmillan, not Churchill for this phrase in 1958. Four year earlier, in 1954, Churchill actually said, “Meeting jaw to jaw is better than war.”

“Don’t talk to me about naval tradition. It’s nothing but rum, buggery [sometimes ‘sodomy’] and the lash.”

“This is the kind of arrant pedantry up with which I will not put.”

On ending sentences with prepositions. Fred Shapiro (Yale Book of Quotations) tracks it to the Strand Magazine, 1942, but no Churchill connection has been found.

“You are my fifth favourite actor. The first four are the Marx Brothers.”

“If a man is not liberal in youth he has no heart. If he is not conservative when older he has no brain.”

“However beautiful the strategy, you should occasionally look at the results.”

No attribution is found for any of the above. Please contact us if you can provide reliable sources. For more on Churchill’s quotes, see this section.