Early in 1953, Winston Churchill’s doctor Charles Moran found the Prime Minister absorbed in George Orwell’s book 1984: “Have you read it, Charles? Oh, you must. I’m reading it for a second time. It is a very remarkable book.” While Churchill and George Orwell (Eric Blair’s pen name) never met in person, they shared similar beliefs about the nature of freedom.

In his new book, Thomas E. Ricks explains what Churchill and Orwell meant by freedom, how they fought for it, and why that battle continues. Explanations are scattered throughout alternating chapters on each man, designed to provide parallel lives. Coverage is cradle to grave, with focus on the 1930s and 1940s. The book seems intended as either review for those familiar with both, or as an introduction for neophytes. It is best as review. Ricks thesis is that “Churchill helped give us the liberty we enjoy now. Orwell’s thinking about liberty affects how we think about it now.” In his “Afterword: The Path of Churchill and Orwell,” Ricks urges readers to walk that path.

Because available pages are insufficient for ample biographies, the intertwined narratives too often seem like erratic Cliffs Notes with odd inclusions and omissions. Unfortunately omitted are any discussions of Savrola, My Early Life, Marlborough, or even the Nobel committee’s explanation of Churchill’s Nobel Prize for literature. Coming Up For Air is merely listed among “close to unreadable” fiction by Orwell.

Such vagaries are compensated for by attention to Orwell’s key insight, expressed early in 1984 by its protagonist Winston Smith, that “Freedom is the freedom to say that two plus two make four. If that is granted, all else follows.” The novel—and much of Orwell’s career—centers on showing why denial of reality is the indispensable foundation of totalitarian states. They thrive on creation and acceptance of lies. Ricks notes of Winston Smith (whose first name, as many have remarked, is one of Orwell’s tributes to Churchill) that “He is especially provoked by the Party’s insistence that only it could determine what was real and what was not. ‘The Party told you to reject the evidence of your eyes and ears,’ he thinks at one point. ‘It was their final, most essential command.’”

The oddest inclusion, as companion to analysis of Homage to Catalonia, is two short paragraphs from Ernest Hemingway’s For Whom the Bell Tolls quoting unpleasant characters without any attempt to distinguish between what they say and what the novel intends by including their remarks.  Ricks ends his glance at Hemingway by quoting “Orwell’s friend Malcom Muggeridge” dismissing Hemingway as “boozy, preoccupied with the image rather than the reality.” So much for Papa.

Ricks shows that here though “Winston does not know it, and Orwell does not say so” the underlying argument reflects the empiricism of John Locke, David Hume, and “most specifically” their intellectual heir John Stuart Mill’s 1859 essay On Liberty. Ricks quotes Mill’s statement that his topic is “the nature and limits of the power which can be legitimately exercised by society over the individual….a question…likely soon to make itself recognised as the vital question of the future.” Most crucial for this issue, Mill insists, is “the inward domain of consciousness…liberty of conscience…liberty of thought and feeling.”

Ricks states that also reflecting Mill’s insight without alluding to it is Winston Smith’s conviction that although he is “uttering a truth that nobody would ever hear….it was not by making yourself heard but by staying sane that you carried on the human heritage.” Without remarking here how Smith’s sanity is ultimately destroyed by the state, thus preventing him from successfully attacking it, Ricks plausibly contends that “In that passage, Orwell presages the dissidents such as Solzhenitsyn, Sakharov, and Amalrik, who in testifying about the facts they perceived, helped bring down the Soviet Union just a few years after the real year 1984. In both worlds—the imaginary one of 1984 and the real Soviet Union—it was a moral victory simply to question the official presentation of truth and posit an alternative by documenting observable reality. The state in both cases knew this and regarded such an act as seditious.”

Churchill’s task during his wilderness, Second World War years, and after was less to counter lies with truth, though it included that, than to prevent a Nazi victory and (later) a Soviet expansion that could veer into atomic Armageddon. Ricks accurately outlines Churchill’s magnificent achievements in holding the fort until arrival of United States forces to help (then overshadow) England’s efforts. Postwar stumbles are duly noted.

Also accurately analyzed are Orwell’s Burmese Days, Down and Out in Paris and London, The Road to Wigan Pier, and Homage to Catalonia. Ricks argues persuasively for the enduring relevance of Animal Farm and increasing impact of 1984. Especially helpful for appreciating the origins and reception of Animal Farm is Ricks’ account of its context in children’s literature. Explication of it is accurate, though surely little needed even by readers being introduced to it for the first time.

On balance Churchill and Orwell is well worth reading for its clear focus on Orwell’s definition of freedom.

Paul K. Alkon is Bing Professor Emeritus of English and American Literature at the University of Southern California, and author of  Winston Churchill’s Imagination (2006).

US Publicity Tour for Churchill & Orwell  by Thomas E.  Ricks 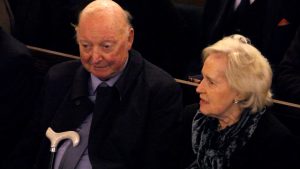